Any hopes the Canal and River Trust (CRT) had that a judgement in its favour in a Judicial Review claim brought by the National Bargee Travellers Association (NBTA) would give the force of law to its interpretation of the rules governing ‘continuous cruising’ were dashed yesterday (Wed 19 February 2014) when the action was discontinued.

Nick Brown, claimant in the judicial review proceedings against Canal & River Trust (CRT) to decide whether the Guidance for Boaters Without a Home Mooring is lawful, yesterday afternoon discontinued the action. He said “During the hearing it became apparent that this case could not after all decide on the lawfulness of the Guidance because I am not facing any enforcement action myself. Therefore the case should not continue”.

"During the course of argument I raised a problem that is that the Courts are reminded of the undesirability of deciding an issue absent a proper factual context... the Court has warned against abstract actions and needs a proper factual matrix to assess cases... In the light of that there is very little purpose to this hearing as it would not resolve anything. CRT would prefer, as a responsible public body, to have a judgment that would allow it to discharge its duties in the right way but any judgement that I could give would be very little use on the ground.”

Nick Brown who was represented by Chris Johnson of Community Law Partnership and Martin Westgate QC said: “The arguments presented by my legal team will be of assistance to boaters who are subject to enforcement action”.

“The more you look at the statute the weirder it becomes”

The judge raised a number of legal points that will be of no comfort to CRT. He found s.17 (3) (c) (ii) of the British Waterways Act unclear: “The more you look at the statute the weirder it becomes” he commented. He added that it would have been helpful if CRT had addressed this dispute by seeking new legislation. Mr Justice Hildyard also told CRT this in the Moore case in 2012.

"as far as 'bona fide navigation' was concerned, what was good for boaters with moorings was also good for those without. “An occasional trip down to the Dog and Duck” might very well be bona fide navigation whether this was from a marina or from a towpath spot."

Mr Justice Lewis agreed that as far as “bona fide navigation” was concerned, what was good for boaters with moorings was also good for those without. “An occasional trip down to the Dog and Duck” might very well be bona fide navigation whether this was from a marina or from a towpath spot.

“Place” could be as small as an individual boat length”

Mr Justice Lewis also observed that “Place” could be as small as an individual boat length, by stating that the mooring or other “place” to keep a boat required by s.17(3)(c)(i) has the same meaning as the “place” used in s.17(3)(c)(ii).

Mr Justice  Lewis also stated that in his opinion, the Guidance took legislation that was already difficult to understand and did not make understanding it easier. Mr Brown observed that this means the Guidance is of little assistance to a boater seeking to ensure he is compliant with the British Waterways Act 1995. Contrary to CRT’s assertion that the Guidance remains “valid and applicable” it is now called into question.

Mr Brown was granted leave to proceed with the judicial review by Lord Justice Jackson in July 2013. Permission was confined to the issue of whether the Guidance accurately reflects s.17(3)(c)(ii) of the British Waterways Act 1995. This governs the obligations of boaters without home moorings. Non-compliance can result in the seizure and removal of the boat.

CRT attempted to claim costs in excess of £100,000 which could deter other challengers, but Mr Justice Lewis rejected CRT’s application and ruled that CRT would have to justify the amount claimed.

Fran Read the National Press Officer of the Canal & River Trust CRT said: “The Trust’s legal team has always viewed this claim as misconceived and confirms that the Guidance remains valid and applicable for boaters without a home mooring.”

Posted by Unknown at 5:45 PM No comments:

The annual pantomime by the Kintbury St Mary's Drama Group this year will raise money for the Bruce Trust — a charity which provides boating holidays for disabled, disadvantaged or older people from its bases at Lower Foxhangers and Great Bedwyn on the Kennet & Avon Canal. 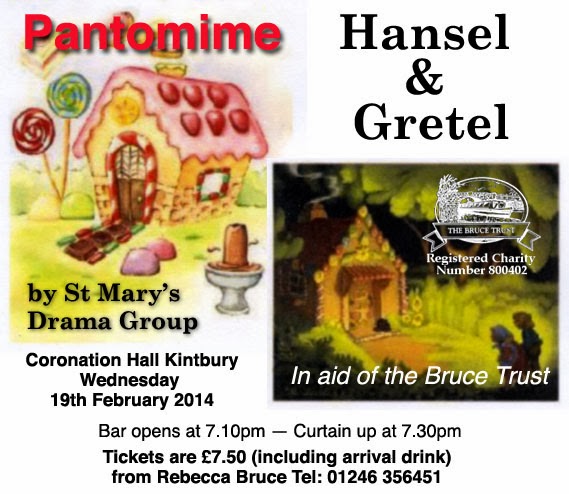 
Bruce Trust Fact File
The Bruce Trust was formed in 1988 by Louise and David Bruce after they sold their chain of Firkin Pubs in London.

They were keen to plough some of the proceeds into a project that would benefit the community and they had become intrigued by the possibility of offering self-catering holidays to disabled, disadvantaged or elderly people cruising on the Kennet & Avon Canal.

After much research they initially put their own money into the project — and over the years they have received many generous donations to the Trust enabling the fleet to be increased to four specially-designed, purpose-built, wide-beam canal boats.

The extra width of the boats gives plenty of space for wheelchair users to manoeuvre and the boats have special built-in facilities, including hydraulic lifts, wide-access boarding ramps, low-level bunks, heating and specially fitted showers and toilets.

Their have been designed so that wheelchair users can steer the boat using the tiller and both Hannah and Rachel have been fitted with a remote steering device that enables people with less upper body mobility to steer from their wheelchair using a joystick.

The Bruce Trust has made it possible for more than 13,000 disabled, disadvantaged or elderly people — and their carers, friends or family — to enjoy participative canal-cruising holidays on the boats. As one family said:

“With increasing age and disability my father Harry’s days of enjoying canal holidays seemed to be over. But last week, there he was rising up on the lift to take the tiller once again and having a wonderful holiday with four generations of his family”.


The holiday makers are helped on their way by the dedication of more than 90 voluntary helpers who make sure that the Trust can operate in the best and most economical fashion.

Some volunteers also crew day trips — this year more than 400 people from day centres or residential homes for the elderly were able to enjoy a day of peaceful cruising on the canal.

Posted by Unknown at 5:30 PM No comments: