Waterways campaigner, Fred Blampied of Saltford has been awarded the MBE in the Queen's Birthday honours.

Fred has been active in the campaigns for Bristol Docks and the Kennet & Avon Canal since 1960 when Robert Aikman, founder of the IWA, addressed a meeting at the YMCA in Bristol which resulted in the formation of the South Western Branch of the Inland Waterways Association with Fred as its Chairman. 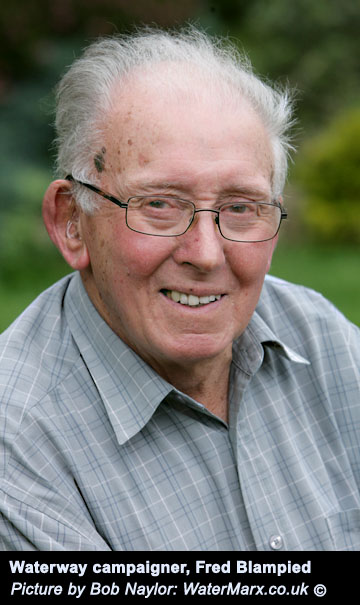 From the beginning the branch had working parties on canals in the area and they worked alongside the Kennet & Avon Canal Association.

Their first major challenge came in 1969 when Bristol Council announced plans to close the city's docks and close the feeder canal that led from the city centre to the River Avon and then on to the Kennet & Avon Canal.

The IWA Branch waged a campaign of opposition that included a petition of the House of Lords. Eventually the plan was scrapped.

Since then, Bristol Docks have become a major attraction and the annual Harbour Festival has gone from strength to strength.

Fred said, "Our inland waterways have become appreciated nationally.  We owe a big thank-you to all who have contributed to our campaigning during the last 55 years."

WaterMarx picture editor, Bob Naylor said: "Fred has been a tireless campaigner for the Kennet & Avon Canal and for Bristol Docks — and his pictures from the early days of the battle to save the canal from closure and then the restoration campaign are outstanding — when I worked on a project to digitise and archive old photographs of the K&A I could always recognise Fred's pictures immediately because of their superb quality."