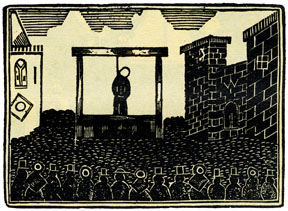 The rise of the canals was inexorably linked with the industrial revolution it fuelled — without one there could not have been the other.
In 1802 the Somersetshire Coal Canal made a junction onto the Kennet & Avon Canal at Dundas (between Bath and Bradford). It was built primarily to carry coal from the Radstock coalfields to fuel steam power and increase mechanisation.
The greatest impact of the canal on towns such as Trowbridge and Bradford on Avon was the building of factories for powered machinery. Beam engines powered by steam were swiftly introduced into these new and substantial factories and many were purpose-built for such powered machinery.


The loss of traditional mill jobs
The River Biss  in Trowbridge was not suitable for powering machinery but once coal arrived then steam power was soon used in the woollen mills and although this created many new jobs it also meant job losses and poverty for many traditional mill workers.


Among the best organised of the mill workers and the most actively opposed to the mechanisation were the shearmen who finished the cloth.  Shearmen were the labour aristocrats of the industry, responsible for ‘dressing’ the fulled cloth before sale. This involved first raising a nap, using a ‘handle’ set with teasel heads, and then shearing the nap with large hand-shears. It was a task which required both considerable skill and strength. It was said that shearmen could make a piece 20 per cent better or worse by due care and labour or the reverse. Their key role in production gave the shearmen a privileged status and a strong bargaining position. They were the best paid and most ‘unruly’ of all the cloth-making trades.
From the 1790s this position came under increasing threat from machinery. The gig mill, a simple system of revolving cylinders faced with teasel heads across which the fulled cloth was drawn, threatened to displace hand-raising. Wiltshire shearmen had successfully resisted its introduction into the fine-cloth trade throughout the eighteenth century. However, increasing use of the machine in Gloucestershire led several Wiltshire clothiers to follow suit. A still greater threat came from the shearing frame, invented in 1787. Setting hand-shears into a travelling frame which ran along the cloth, shearing as it went, this device threatened to displace the shearmen completely. From the late 1790s Wiltshire clothiers attempted to set up shearing frames in their outlying shops.


Resistance to changes
The Wiltshire shearmen embarked on a determined resistance. A campaign of strikes, blacking, and incremental industrial violence developed, culminating in the notorious ‘Wiltshire outrages’ of 1802. Much of this violence was low-key and intimidatory, but the determined resolve of a handful of powerful clothiers to break the might of the shearmen by mechanisation resulted in increasing attacks on their mills. In one incident on the night of 22 July 1802, a group of men, armed and allegedly with their faces blacked, burst into the isolated mill owned by Thomas Naish, a Trowbridge clothier, at Littleton, some 4 miles from the town. The mill certainly housed a gig mill. It may well also have contained a new shearing frame. Leaving one of their number to guard the manager, Ralph Heath, the men quickly set the mill on fire. The loss was said to amount to some £8000. The local authorities, under pressure from the government, made determined efforts to secure the perpetrators. On 3 August a nineteen-year-old shearman's apprentice, Thomas Helliker, working for Naish at his finishing shop in the Conigre at Trowbridge, was arrested by Naish and charged with having been the man who had held Heath prisoner. He was sent to Salisbury gaol under heavy military escort. That night Naish's Conigre workshops were burnt to the ground.


Thomas Hellicker tried
Helliker was brought to trial at the Salisbury assizes in March 1803. He was found guilty, solely on the evidence of Heath, and sentenced to death. He was hanged outside the gaol on 22 March. Helliker was popularly believed to be innocent, and indeed there is good evidence to suggest that Heath's identification of his captor may have been induced by pressure from Naish or the prospect of the £50 reward. Helliker always protested his innocence but refused, despite constant inducements, to impeach any of his fellow shearmen. After the execution, Helliker's body was taken from the authorities, placed upon a cart, and pulled in solemn procession across Salisbury Plain back to Trowbridge. There, it was said, girls in white dresses led thousands of mourners who accompanied the body to the parish church where they forced the curate to bury Helliker in the churchyard with full rites. 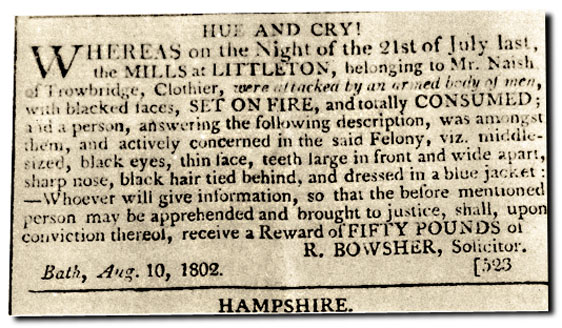