George Gibson who died last week was a boating man to his very core.  He served as an engineer officer in the Royal Navy for 37 years. His last job with the admiralty as a Commander included the responsibility for several hundred small boats belonging to, or affiliated to, the services so when George retired from the Navy in 1985 he put this knowledge of small boats to good use when he became a marine surveyor specializing in canal and river craft.

George was one of a band of entrepreneurs who put their faith, and money, into setting up businesses on the K&A Canal at a time when many thought it would never re-open. George and other riparian businesses, along with volunteers working on restoration projects, helped to drive the restoration forward. He was Chairman in the early days of the Association of Canal Enterprises (ACE), which later became the Kennet & Avon Canal Trade Association.
George ran an electric trip-boat, Patricia, from Hilperton and in 1986 he and his family moved to an old builders' yard and cottage alongside the Kennet & Avon Canal at  Honeystreet.
At that time the canal was closed. The weed clogged, shallow water of the 14 mile Long Pound was only just navigable largely thanks to the movements of the landlocked nearby Pewsey Wharf Boat Club.


Over the years proper wharf facilities and moorings at the 'bottom of the garden' site were installed and Builder’s Wharf run by George and his wife Shelagh was considered to be one of the best kept moorings on the canal system.
When British Waterways introduced the Certificate of Compliance (C of C) in 1990 (the forerunner of the Boat Safety Scheme) George was one of the first Surveyors in the scheme. His reputation for fairness in his examinations and his willingness to share knowledge is legendary — as are George’s surveys that he bashed out on his old typewriter with its distinctive italic type face.
As well as running a business on the canal George was involved with the K&A Canal Trust and he had been a volunteer engineer at its steam powered pumping station at Crofton. When, thanks to the efforts of the K&A Canal Trust and Bath City Council, the Widcombe Flight of locks in Bath was re-opened in June 1976 George and Shelagh were amongst the first to travel up  the flight in their boat  Border Gypsy
George finally retired at the age of 80, Builder’s Wharf was sold and he, his wife Shelagh and his son Chris moved to Devizes.
George is survived by his wife, Shelagh and two sons, Chis and Stephen and granddaughters Leila and Yasmin.

Tea after the service in the nearby Coronation Hall.  Family Flowers only.
Posted by Unknown at 3:59 PM 6 comments: 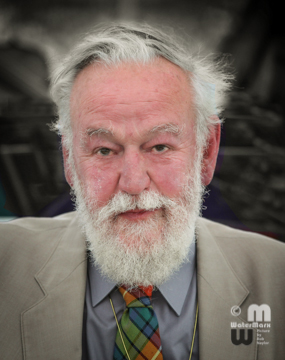 George Gibson who was well known on the Kennet & Avon Canal as a marine surveyor and owner of Gibson's Boat Services on Builder's Wharf at Honeystreet near Pewsey died today (Friday July 5th).

Details of the funeral, which will take place at St. Mary's Church, Alton Barnes, and a full appreciation of Georges contribution to the maritime world will follow shortly.


Picture by Bob Naylor: WaterMarx©
Posted by Unknown at 8:30 PM No comments: