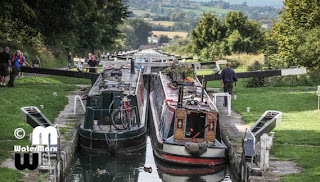 Winter opening hours will operate on all other days.

Padworth Swingbridge (27) at Aldermaston is currently open to road traffic and closed to boat traffic today (Tuesday 10  September) due to a fault — it should be re-opened tomorrow (Wednesday 11th September).
Posted by Unknown at 3:01 PM No comments:

The Kennet & Avon canal and towpath have been re-opened at Sells Green near Devizes following a fire yesterday (6 September).

The fire destroyed two units within a 100m x 50m building. The building contained acetylene, propane and argon cylinders, which led to a safety cordon being put into place and the canal and towpath were closed as a precaution.

Fire crews stayed on site until after 10 pm yesterday.

A fire investigation is still taking place but initial findings suggest the cause to be accidental.
Posted by Unknown at 10:57 AM No comments:

The Kennet & Avon Canal and towpath at Sells Green, between Devizes and Melksham, has been closed today (Friday 6 September) because of a fire.

Wiltshire Fire & Rescue Service was called to an industrial unit at Hillview Farm early this afternoon and found a number of vehicles and a workshop on fire.

The building contains acetylene, propane and argon cylinders, so a safety cordon has been put in place.

Six fire crews – from Devizes, Trowbridge, Calne, Bradford on Avon, Corsham and Ludgershall – are tackling the blaze, supported by a water carrier from Pewsey and an incident command vehicle from Devizes.

The cordon will remain in place until firefighters are sure that the cylinders no longer pose a risk.
Posted by Unknown at 5:10 PM No comments:

The Caen Hill flight of locks on the Kennet & Avon Canal has been closed for the second time in only a few days after two boats became jammed in a lock today (Tue September 3).

The boats had travelled together down the Devizes Flight with no problem.  They entered lock 41 on Caen Hill with no difficulty but as they emptied the lock they became jammed and ‘hung-up’ in the lock.

The crews quickly refilled the lock and the boats were re-floated but they both became jammed under the coping stones on the edge of the lock.

And there they stayed until Canal & River Trust (CRT) staff were able to assess the situation and bring in the equipment needed to remove the coping stones and to free the boats — a process that took more than five hours.

The Caen Hill Flight is now open to navigation. Single boats only through Lock 41. Please take extra care around Lock 41, where the damaged area is fenced off.

Posted by Unknown at 5:42 PM No comments: