Sir Anthony Durant the former Chair of the Parliamentary All Party Group for Inland Waterways and President of the Kennet & Avon Canal Trust has died aged 88.

Tony’s affection for the waterways was kindled by his mother - who was, he said, barmy about rivers. And he persuaded his wife Audrey to spend their honeymoon cruising on the Thames. That love was to benefit all our canals and the K&A in particular.


Tony joined the Royal Navy at the end of World War 2, training in supplies and victuals. When he left the Navy he took his victualling into the catering industry, as a commis waiter at the Connaught Hotel, London, where he also learnt a bit of cooking.


Then he spent two and a half years at Coutts Bank before he started working for the Conservative Party as National Organiser for the Young Conservatives. He successfully stood for Woking Council where he became Deputy Leader of the Council and Chairman of the Education Committee. His political career was beginning to take off.


He was appointed as an agent in South Yorkshire where he helped reduce a 30,000 Labour majority by 26,000. He then fought and won another Labour seat as the candidate, Reading North, entering the House of Commons in 1974. He remained there until he stood down at the 1997 elections – though his constituency changed to Reading West with the 1983 boundary changes.


With the K&A Canal passing through his constituency and the love of waterways inherited from his mother, he soon got involved with the All Party Group for Inland Waterways, which was relatively dormant at the time. He revitalized the Group and under his chairmanship it held monthly meetings attended by representatives of waterways throughout the land and was one of the largest All Party Groups in the House. This was how he came to know the K&A Canal Trust.

Talking in 2011 about his time and activities with the K&A Canal Trust, Tony said: “I was always happy to support the Trust with its promotional activities – especially if it involved beer!” And he was there in 1987 when Reading Branch celebrated Courage’s 10 millionth barrel of beer aboard nb Hesperus.

He offered himself to the Trust as President and took up the post in 1995.


And he was always there when needed to represent Council at Trust events - his real strength was supporting Trust work and branch activities such as Reading Branch’s WaterFest. 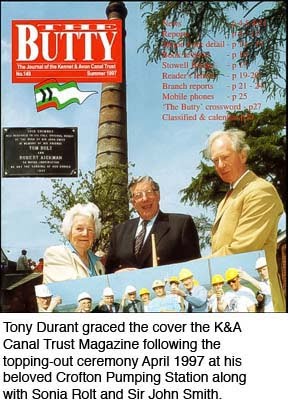 This wasn’t the only occasion when connections in high places were put to good use. Tony became a Government Whip in 1993, which meant he had to stand down from Chairing the All Party Group of the Inland Waterways – by taking the government’s shilling he had to give up the Inland Waterways Group. But all his influence wasn’t lost. He became Vice Chamberlain to Her Majesty the Queen. 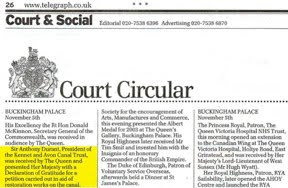 So when Reading branch decided to re-enact the 1956 petition to the Queen during the campaign against closure and collect names along the canal and present them to her with a declaration of gratitude for saving the K&A, Tony managed to arrange an audience with her Majesty – the only Canal Society to be granted such an audience.

Tony stood down as President of the K&A Canal Trust in 2009. In a tribute read at Tony’s retirement party, his successor as President, the then MP Michael Ancram, said: “He was a man who had the interests of the Kennet & Avon Canal close to his heart and over his years of office he worked tirelessly to promote the interests both of the Canal and its users.  He has a genuine love of inland waterways in general and of the K&A in particular. He never missed an opportunity to speak up for the interests of the Canal whenever the right moment arose, and when he did he spoke with feeling and warmth. All those of us who love the K&A have much to thank Tony for. I happily pay the warmest tribute tinged with a touch of trepidation at the knowledge that he will be a hard act to follow.”
Tony is survived by his wife of 56 years, Audrey, their three children, Karen, Nicholas and Marcus, and four grandchildren.
Di Harris ©
Posted by Unknown at 2:13 PM